There are a number of competitions across the year in which the girls compete against each other while representing their House. These are hotly contested and vary each term, but recent battles have included hockey, netball, rounders, singing, and a spoken word competition. The year culminates in Sports Day, in which all pupils from both the Prep Schools participate.

Each House is led by a teacher and two House Captains. The Year 6 girls are given the opportunity to put themselves forward as the most eligible candidates to lead their House to victory. Voting takes place each September and the elected captains are responsible for leading their House for the rest of the year. Throughout each term, all the girls in the School are keen to receive House points that go towards the weekly totals. On an individual basis, girls also receive awards of bronze, silver, gold and platinum to celebrate their hard work and exemplary behaviour.

At Surbiton High Girls’ Preparatory School we actively encourage and support girls to participate in a range of fundraising activities. Numerous fundraising events are held and celebrated throughout the year, reinforcing the School’s motto ‘May Love Always Lead Us’ and supporting the ethos to serve and respect others. At the start of the academic year, all girls are given the opportunity to nominate a charity for the School to support over the course of a term. They are required to give a short presentation to the Charity Committee, detailing the reasons why the charity is important to them and why we should support them. They also outline their ideas for fundraising events. Six to eight of these charities are shortlisted and are then presented to the whole School, who then have the unenviable task of voting for the two pupil-chosen charities that will be supported over the coming year.

In addition, two years ago, our Year 6 leadership team were instrumental in developing a relationship with a local homeless charity called SPEAR. We will also be continuing our support for them as a whole School, bringing the total number of charities supported each year to three. We invite a representative from the charities to present an assembly to the School in order to broaden the girls’ knowledge of the importance of the charity. This year, the whole School has been involved with charity fundraising, with year groups organising and running their own events. Events have included a hugely popular ‘Gunk the Teachers’ event as well as a movie afternoon, coin collection, Easter fun week and numerous cake sales and raffles. 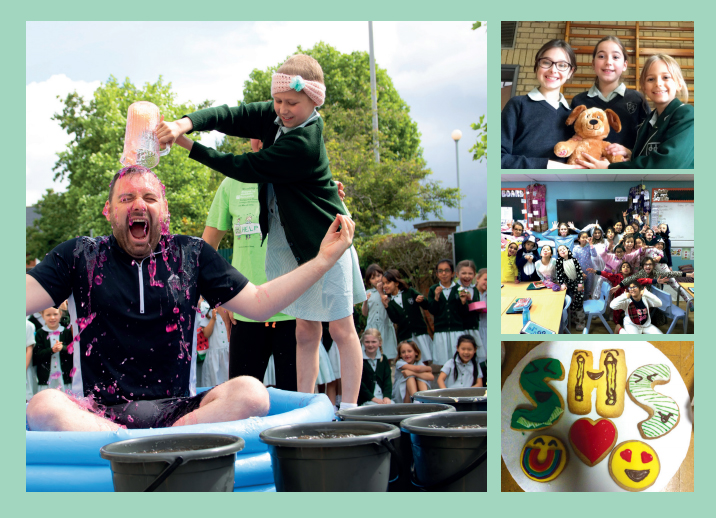 RECENT
NEWS
We use cookies on our website to give you the most relevant experience by remembering your preferences and repeat visits. By clicking “Accept All”, you consent to the use of ALL the cookies. However, you may visit "Cookie Settings" to provide a controlled consent.
Cookie SettingsReject AllAccept All
Manage consent

This website uses cookies to improve your experience while you navigate through the website. Out of these, the cookies that are categorized as necessary are stored on your browser as they are essential for the working of basic functionalities of the website. We also use third-party cookies that help us analyze and understand how you use this website. These cookies will be stored in your browser only with your consent. You also have the option to opt-out of these cookies. But opting out of some of these cookies may affect your browsing experience.
Necessary Always Enabled
Necessary cookies are absolutely essential for the website to function properly. These cookies ensure basic functionalities and security features of the website, anonymously.
Functional
Functional cookies help to perform certain functionalities like sharing the content of the website on social media platforms, collect feedbacks, and other third-party features.
Performance
Performance cookies are used to understand and analyze the key performance indexes of the website which helps in delivering a better user experience for the visitors.
Analytics
Analytical cookies are used to understand how visitors interact with the website. These cookies help provide information on metrics the number of visitors, bounce rate, traffic source, etc.
Advertisement
Advertisement cookies are used to provide visitors with relevant ads and marketing campaigns. These cookies track visitors across websites and collect information to provide customized ads.
Others
Other uncategorized cookies are those that are being analyzed and have not been classified into a category as yet.
SAVE & ACCEPT
Powered by